The art of building a nitric acid plant 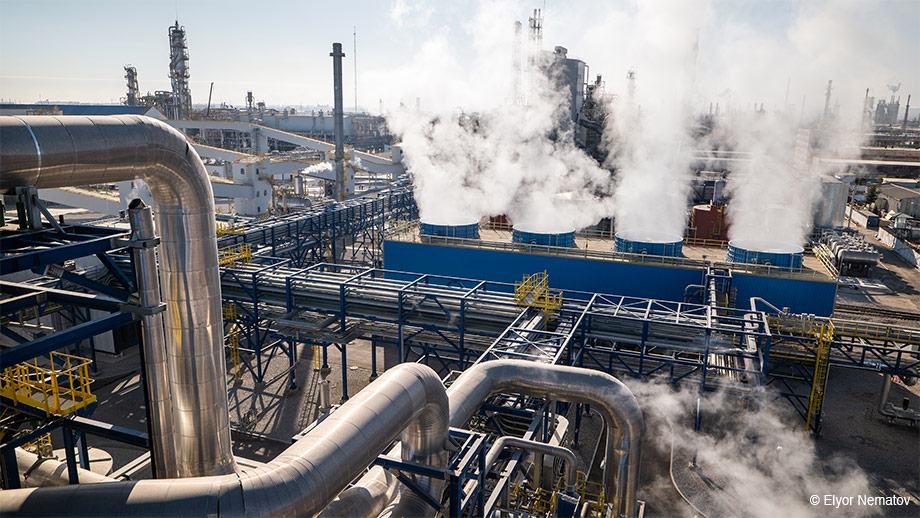 Efficiency, emissions and emergencies: how a new nitric acid plant is helping to transform Uzbekistan’s chemical industry and blazing new trails for commissioning

He takes a brief look at the absorption tower rising 50 meters into the sky. Not a cloud in sight. A deep, cerulean blue stretches above this region in southwestern Uzbekistan named for the fifteenth-century scholar and poet Ali-Shir Nava'i.
Yet it isn’t poetry he’s concerned with at the moment, but another kind of art altogether.

It wasn’t just a challenge from the technical side. We had to be organizationally prepared for anything related to both Covid-19 and the plant itself. 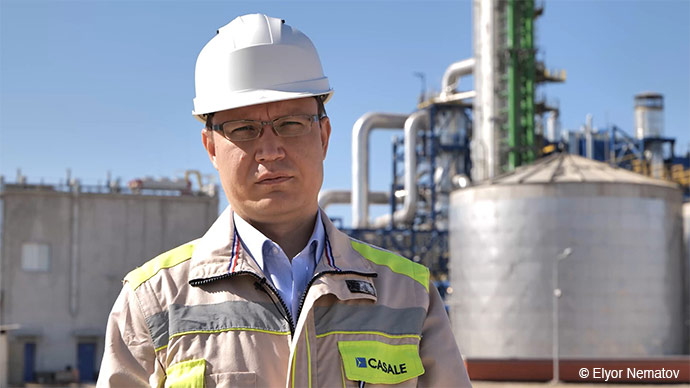 With a national lockdown and a looming pandemic, «we had to be prepared for anything» says Yuriy Idrisov, Deputy Director of Casale’s Permanent Establishment in Uzbekistan. For the past three years, Yuriy Idrisov has been part of a comprehensive team of designers, planners, construction workers and engineers building a large-capacity, ultramodern nitric acid plant in the city of Navoiy. «One of the distinctive features,» says Idrisov as he lowers his eyes from the tower, «is our use of an extended absorption column design, incorporating a closed chilled-water circuit to help us reduce ammonia slippage.»  Even as he speaks, trickling water and air are converting a mixture of nitric oxide into a 60-percent nitric acid solution inside the tower. And shining in the sun behind him are three massive, silver tanks - each with a volume of 2,000 cubic meters - where the finished nitric acid will be stored. Idrisov's pride in the plant is palpable: «It wasn’t just a challenge from the technical side: We had to be organizationally prepared for anything related to both the Covid-19 pandemic and the plant itself.» 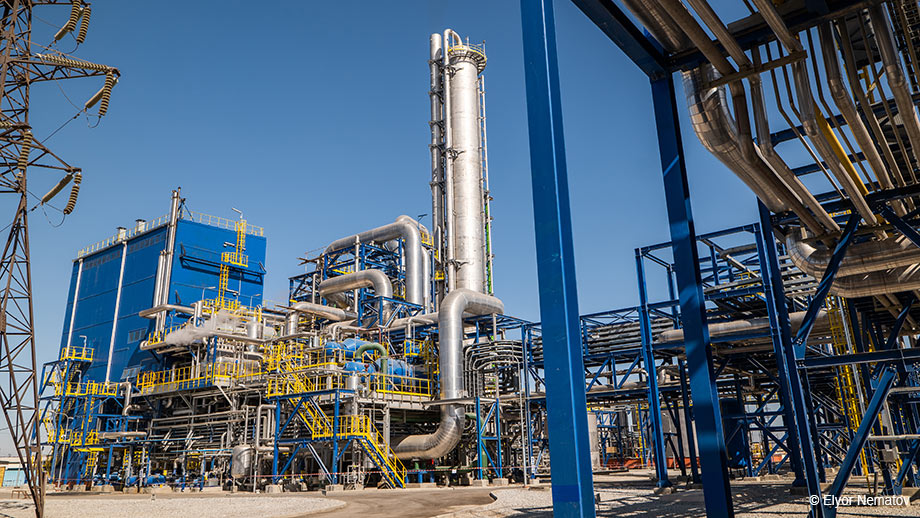 
Modernizing industry in the Uzbek steppes

This is the fourth large-capacity nitric acid plant built by the Swiss-company Casale SA using its NA2000 Dual Pressure technology, «designed for energy efficiency and low emissions,» says Idrisov, Deputy Director of Casale’s Permanent Establishment in Uzbekistan. Specialists in the production of fertilizers and chemicals, Casale was awarded the EPC lump sum turnkey project by Uzbekistan’s largest chemical company, JSC Navoiyazot. Early-work construction began in 2018, and thanks to a creative approach to commissioning during a national Covid-19 lockdown, the plant has been operating steadily since June 2020.

The history JSC Navoiyazot dates back to 1964 and the time of Khrushchev and the Soviet Union. Already then, the company specialized in the production of chemical reagents, consumer goods and low-tonnage chemistry. Their main product, however, is mineral fertilizers based on ammonia, nitrogen-phosphorus or nitric acid. Today, the company employs around 10,000 people - an important factor for the young city of Navoiy, which was newly founded in 1958 and has just over 133,000 inhabitants. 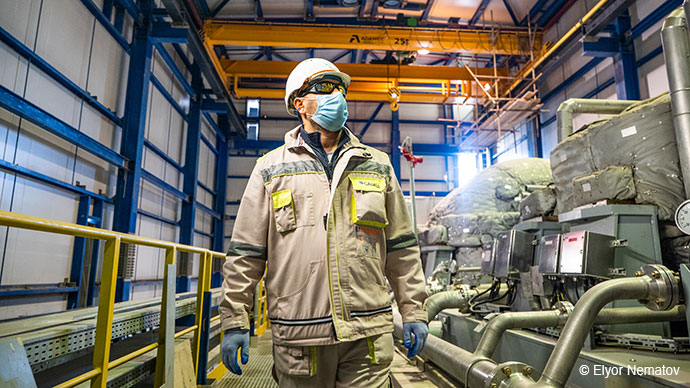 At the heart of the plant is a four-part compressor train (right) designed to reduce the consumption of energy. The new plant, which cost US$216.6 million and produces 500,000 metric tons of nitric acid annually, has created over 120 new jobs, and local specialists and resources were used during construction, with around 50 percent of the team coming from Uzbekistan itself. The project is part of a larger modernization drive to increase production and reduce the environmental impact of the country’s chemical industry, a cornerstone of the Uzbek economy. Primarily used for cultivating cotton - Uzbekistan is the sixth largest cotton producer in the world - more mineral fertilizer is planned to be exported.

Designed for efficiency and environment

The plant’s centerpiece is a four-part compressor train installed by MAN Energy Solutions, concealed in an easy-to-spot bright blue building that looks like a toy cube in a mesh of pipes and cables. The train allows for higher rotational speeds while reducing the energy footprint - a major factor in the plant’s profitability. «Another distinctive technical feature,» adds Idrisov, «is the use of a single ammonia oxidation burner, which simplifies the layout with an easier gauze management.» And the company used a simplified layout of secondary and tertiary catalysts to improve the plant’s abatement function. 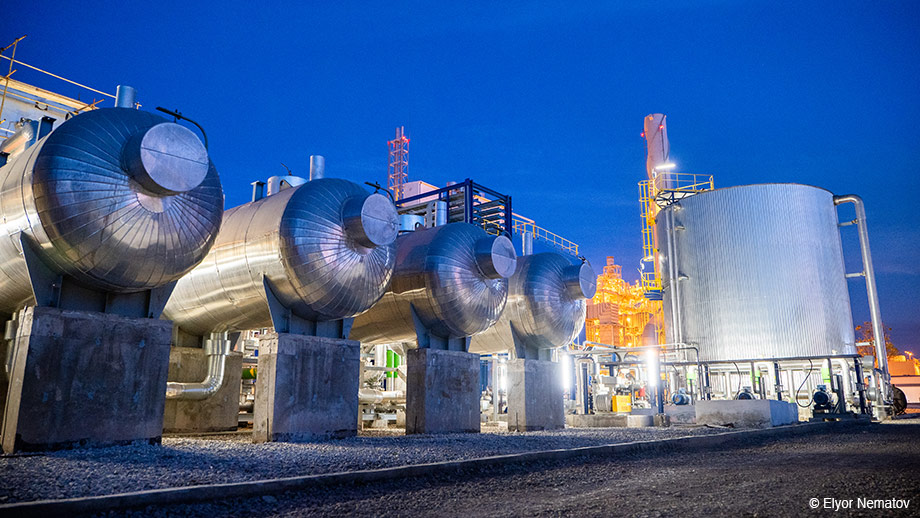 To further reduce the plant’s environmental impact, Casale included a modern water treatment unit that was commissioned remotely along with the compressor train, the burner catalyst and the reactor catalyst.

«Our focus was on reducing the amount of ammonia required to produce one ton of the product and increase the steam export,» explains Idrisov. «So we chose the dual pressure technology as a solution to ensure a low specific consumption of ammonia with the lowest possible emissions and to promote safe operation of the plant.» The plant’s design specific consumption of ammonia is 283 kilograms per ton. «At the moment we’re better than this indicator because we’re consuming less than 280 kilograms per ton.» Idrisov adds: «We’re equally better in terms of emissions. The requirement was to have less than 50 parts per million emissions of NOX gases and N2O gases while remaining below 3 parts per million for ammonia. The actual figures are 30 and 20 respectfully, with less than 1 part per million for ammonia.»

The reduction in emissions is made possible by Casale's NA2000 Dual Pressure technology. Based on 50 years of development experience, the Dual Pressure technology offers low operating costs with regard to specific ammonia consumption (as NH3/MT HNO) and precious metals losses, while ensuring high specific steam/energy export. Installed in more than 70 plants worldwide, the CASALE nitric acid process is one of the major players in the nitric acid world market, known for its efficiency and reliability. The successful completion of the nitric acid process in the Navoiy plant, however, is of particular interest as the Covid-19 pandemic continues to delay or even halt construction projects around the world.

A multinational group of engineers and onsite specialists came together to keep the project running during a national Covid-19 lockdown.

We were able to check the plant in many parts over the Internet and complete the final phase via remote commissioning.

Commissioning during the pandemic

«Everything was going according to plan,» says Giovanna Roviello, «We’d already completed some of the cold commissioning, but then the Covid-19 pandemic thwarted our plans. That was in March. Our team had to leave Uzbekistan as soon as possible.» We meet Roviello in a place that played a very important role in the completion of the nitric acid plant - namely, the Internet. A process engineer at Casale, she accompanied the entire progress of the new plant. «The pandemic put the planned commissioning in jeopardy,» she says. An economic catastrophe for the customer and investors was looming.

What to do in such an unforeseen situation? The decision was made to go down a path that had never been trodden before for a plant of this complexity. Casale quickly assembled a team in Navoiy, supported by their engineering department in their offices in Lugano, Switzerland, and Prague, Czech Republic, along with key vendors. «It was a multinational group of professionals,» says Roviello, from Switzerland, the Czech Republic, Germany, Italy and Spain, working seamlessly with the onsite team that kept the project running.

«It still sounds a little crazy,» says Roviello. «But we were able to check the plant in many parts over the Internet and complete the final phase via remote commissioning.» Casale directed and supervised the remote commissioning of the ammonia burner catalyst, the abatement reactor catalyst and the water treatment unit. And with the help of MAN Energy Solutions experts in Germany, the compressor train was set entirely in motion via remote commissioning over the Internet - an industry first. Roviello smiles. The nitric acid plant continues to be running smoothly despite the ongoing pandemic - thanks to top-class engineering and the strong will to take risks when needed. And therein lies a little bit of poetry after all.

Based in Berlin, author and journalist Ingo Petz has worked for more than 20 years as a freelancer covering Eastern Europe for publications such as the Frankfurter Allgemeine Zeitung and Der Standard.