Reducing the carbon footprint in the synthesis of chemicals is a new challenge, which is necessary to have sustainable products designed to minimize the environmental impacts during the whole life-cycle.

In order to reduce carbon dioxide emissions there are essentially two routes: the first is to capture and sequestrate the CO2 after its generation and this leads to so-called “blue” products; the second is to totally avoid the CO2 generation by the use of renewable energy and feedstocks and this is the path to “green” products.

Casale has been active for several years in the development and optimization of both green and blue technologies to be applied in the production of ammonia and methanol, which are two of the most energy intensive chemical products, responsible for the emission of large quantities of CO2.

The portfolio ranges from Blue Ammonia (A6000CC) and Blue Hydrogen (H10000CC) technologies, which are optimized for the carbon sequestration, to the Green Ammonia and Green Methanol technologies, for the production from renewables energies with zero emissions.

All the mentioned Blue and Green technologies can be applied to revamp existing plants or to integrate them in various grades of hybridization.

The following diagram represents the main “ammonia colors” which differ in the energy source and in the hydrogen production process. 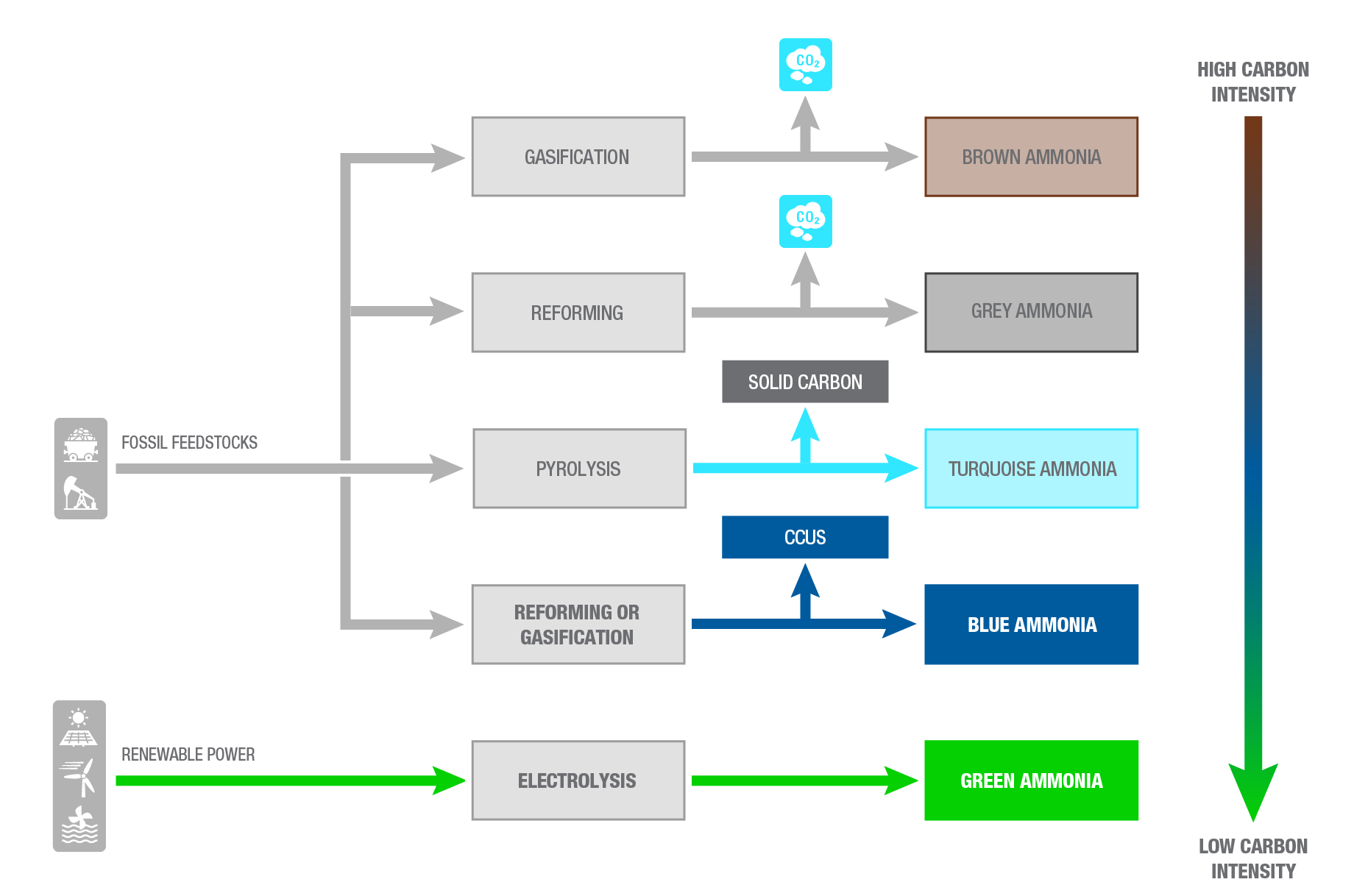 The rapidly decreasing cost of renewable power generation is putting “green” hydrogen (i.e. produced through electrolysis powered by renewable energy) under the spotlight as a promising energy carrier for a number of applications.

Hydrogen can be compressed or liquefied for storage and transport, a process that is far from ideal due to high CAPEX and OPEX requirements, as well as significant safety risks. One of the most suitable method of transporting hydrogen via sea is to chemically convert the hydrogen molecule into an energy carrier such as ammonia, methanol or liquid organic hydrogen carriers. Among these, ammonia is one of the most promising energy carriers.

Similarly to fossil fuels, ammonia is both a chemical energy carrier and a potential fuel, where energy is released by the breaking of chemical bonds. Crucially, ammonia has the advantage of releasing no carbon emissions when used as a fuel, and its green credentials can be further enhanced if sustainable energy is used to power ammonia production. 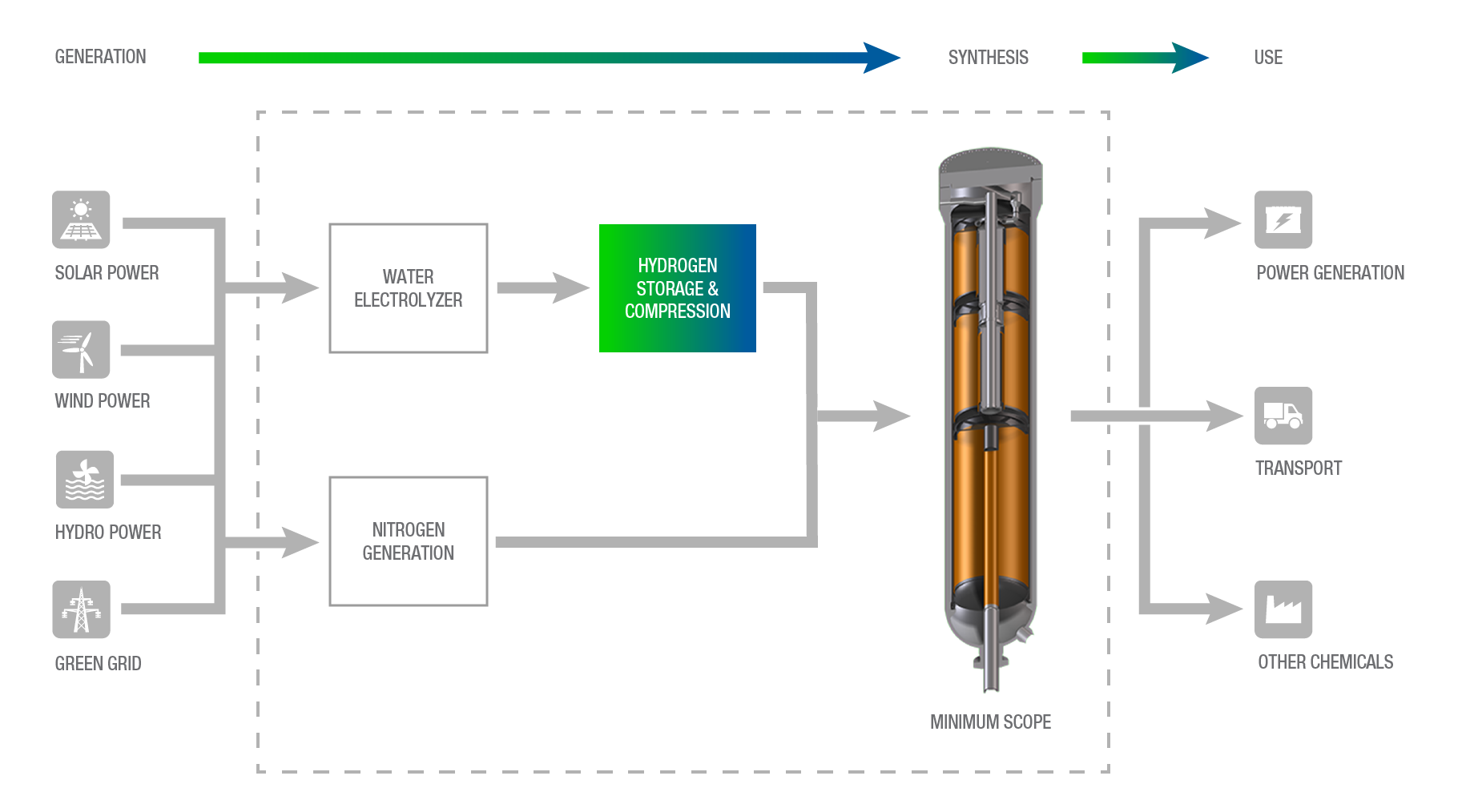 There are a number of key features that make ammonia particularly suitable as a green hydrogen carrier:

Thanks to its experience in designing and revamping hundreds of existing ammonia plants, Casale is able to customize the design of a new Green Ammonia plant with capacity ranging between few MTD up to few thousand MTD of ammonia production with an optimized CAPEX and OPEX.

With the so called “green hydrogen integration”, a traditional (grey) Ammonia plant can be revamped in order to consistently cut energy consumption and CO2 footprint. The Casale approach allows to minimize the intervention in the existing production structure according to the required hybridization degree and to the overall design of the plant.

Biomass gasification route leads to a plant which is similar to a coal gasification plant, for which Casale has almost 20 references in China.

In this type of plants Casale can provide the CO-shift section, synthesis loop, distillation and storage. Moreover, according to the methane content in the make-up gas, the purge gas can be processed in an ATR unit equipped with a process gas saturator that uses distillation bottom water to minimize liquid effluents.

In the transition towards completely decarbonized fuels, Blue Ammonia and Blue Hydrogen – defined as the version of the element whose production involves carbon capture and sequestration (CCS) – represent an attractive prospect.

Blue Ammonia A6000CC is a “Carbon Capture” single-train process suitable for capacities of 6,000 MTD of Ammonia. Adding a CO2 recovery section on flue gas from primary reformer to a standard ammonia plant transforms it into a blue ammonia plant, with very high CO2 sequestration (above 95%).

A6000CC enables the manufacturers to bring together technologies and expertise to reduce greenhouse gas (GHG) emissions and cope with global warming.

Casale technology can be used not only to build a new plant, but also to convert existing grey ammonia plant to blue ammonia production.

Blue Hydrogen H10000CC is a patented Casale process scheme designed to reach high capacity, high efficiency and to reduce the generation of high temperature heat, limited only to pre-heating purpose, which is the main responsible for carbon emissions to stack.

Produced syngas is further processed in a shift section and purified in a CO2 removal section to produce blue Hydrogen product.